Success for our Rugby 1st XV 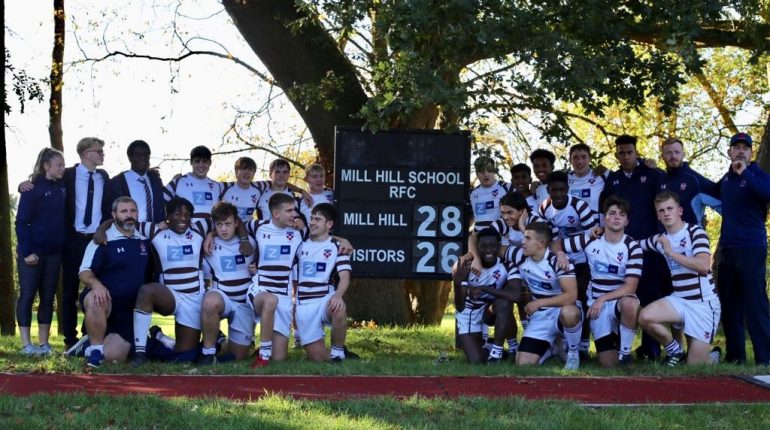 This week saw the Mill Hill 1st XV enter into round two of the National NatWest Cup Fixture against UCS.

This was always going to be billed as a gladiatorial fixture of epic proportions with the two sides already fixtured to face each other on the 7 December as their last matches of the season, so the opportunity to play in the cup would add another dimension to this already anticipated fixture.

The theme for the week was behaviour and match management, could we control the game or would it control us? The boys started well, full of energy and passion and ran up a 14-0 early lead, their composure to pounce when needed to was exceptional given the pressure the UCS  players were providing in defence.

There was always potential for momentum to shift and minds to switch off and a strong and powerful UCS side kept attacking and deserved their try just before the half time whistle. Half time score 14-7 to Mill Hill.

Mill Hill found themselves on the end of a relentless display of power and offloading from a buoyant UCS team, wave after wave they kept carrying with their forward runners making metres and sure enough for UCS this paid off, with ill-discipline at the breakdown UCS raced into a 26-14 lead.

This delivered a new challenge for the Mill Hill players having not been in this position before this season, having to find two converted tries to take the lead back and win the game.

With a renewed sense of focus and a willingness to work even harder for each other as well as the large group of vocal supporters on the touchline the pressure from the Mill Hill defence eventually took its toll on UCS and the required 14 points were scored.

With the final whistle, a scoreline of 28-26 and victory to Mill Hill, the 1st XV had demonstrated how far they have developed this season both on and off the field.

I would like to thank the incredible support from the side lines from so many pupils, parents and staff that came down to watch and support the boys it was hugely appreciated by us all.