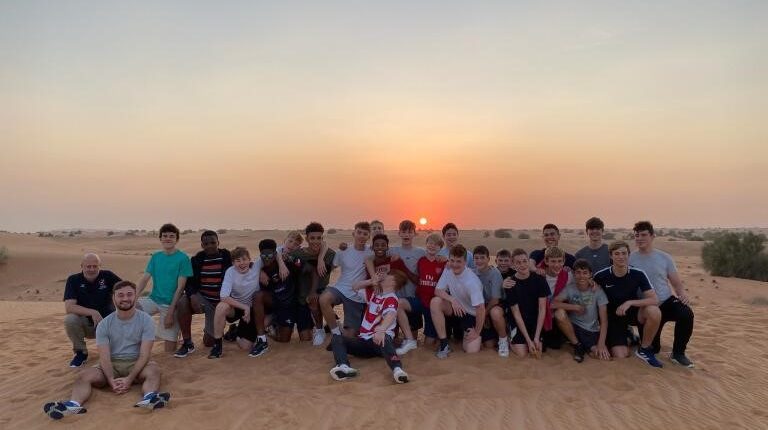 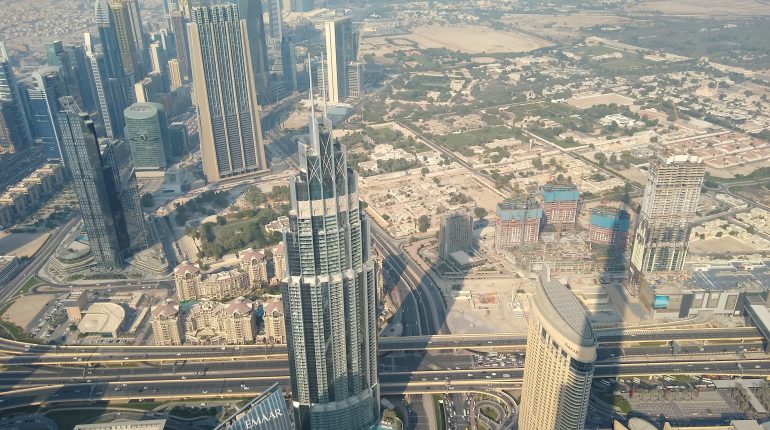 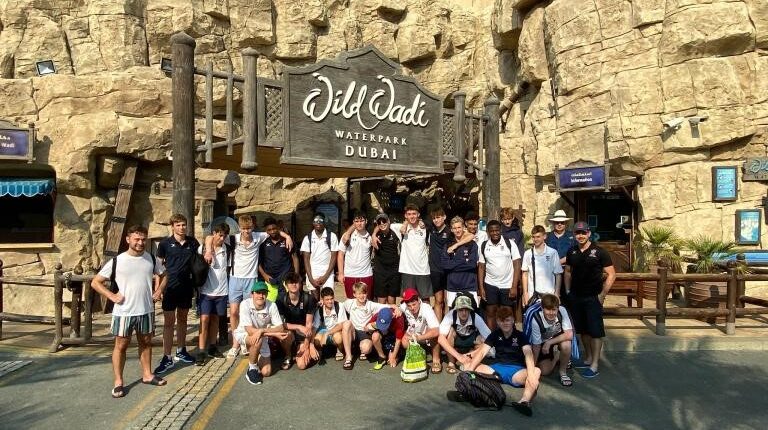 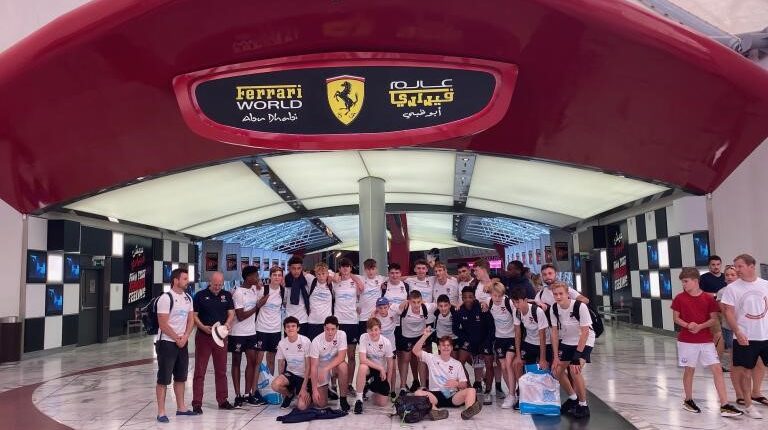 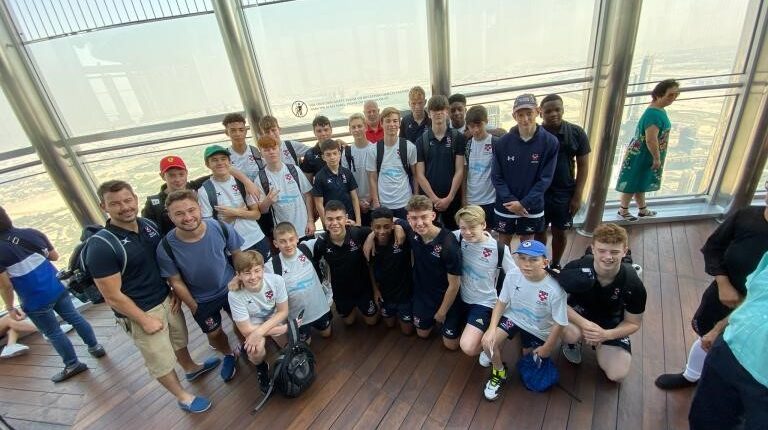 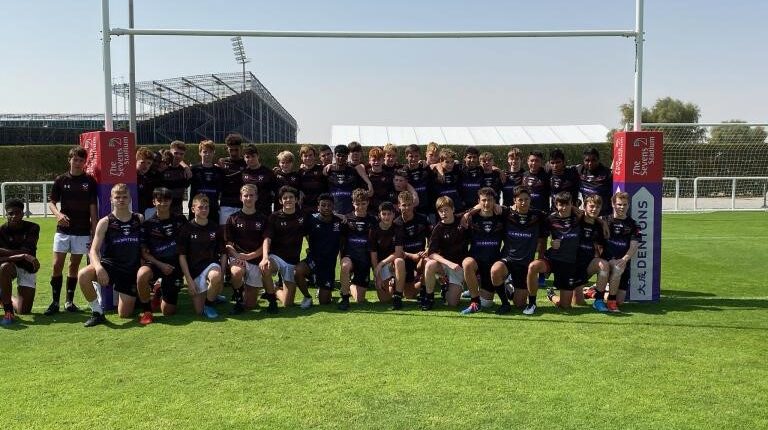 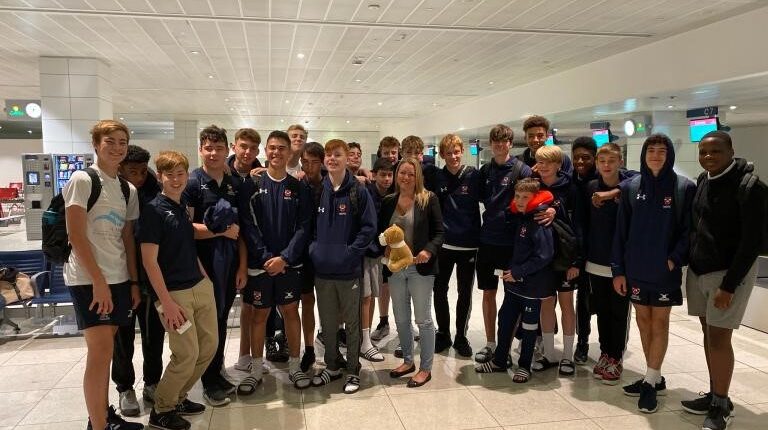 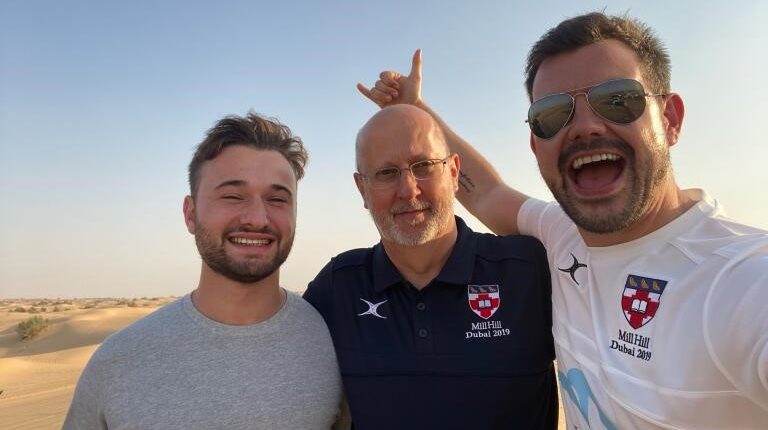 A squad of 23 U15 Rugby players spent the first week of half-term on tour in the United Arab Emirates, where they had interesting and varied experiences on and off the pitch, including the amazing sight of gleaming spires of buildings in the sweltering desert of the Arabian Gulf.

As a rugby tour the central points were three very tough encounters with some very talented UAE club teams, including a game against a Select XV some of whose players had been in the finals of the Rosslyn Park 7s…

The first morning, almost directly off the plane saw the whole group decamping to a water park: an early introduction to a week of 35ºC (and more) temperatures. Even the water was ‘scorchio’.

Refreshed by this, ie exhausted, everyone decamped to the hotel for a well-deserved rest before the following day’s odyssey from Dubai to scenic Abu Dhabi where, after a dalliance in Ferrari World, the team had their first fixture against Abu Dhabi Harlequins: a bruising and tough match watched by Mrs Sanchez, parents (yes, we had a travelling band of support with us) and Raj Achan, the Old Millhillians rep in the UAE.

The second game was vs Dubai Barbarians, a team of that emirate’s very best players; this was a bit of an eye-opener in many ways, but the boys, under the expert tutelage of Mr Hatherley-Hurford, fought bravely under the scorching afternoon sun.

And so on to a few more sights, including a trip up the world’s tallest building : the Burj al-Khalifah, some 828m high. From a mere 500m up we had incredible views over the Dubai creek and out to the blue gleaming of the Arabian Gulf. A desert wasteland with a few buildings when Mr Homer* first visited in 1987 has become a vista of architectural wonders sparkling in the clear sun.

So, with the temperature at a moderate 40ºC, what better to do than decamp to…the beach. Followed by the last game of the tour, vs Dubai Exiles, our main host club, and the one that the tour’s oldest person (*) played for at the Dubai 7s in 1996.

The team had the privilege to play this at the remarkable Dubai Sevens Stadium, and had another tough scrap with a finely skilled outfit who included some of the players from the earlier Barbarians fixture.

After this we had a jaunt just down the desert highway for some wadi bashing in the golden dunes of the Arabian Desert. And an evening BBQ under the stars before the following day’s departure back to scenic Stansted and beyond.