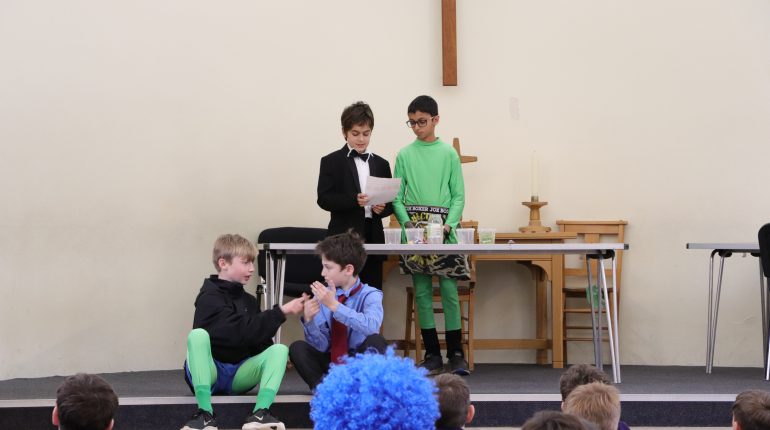 Mrs Hunt’s keen and enthusiastic, book-loving Upper School Library Assistants were invited to visit Grimsdell to read to some of the youngest pupils in the Foundation. Miss Bufton and Mrs Harvey (Grimsdell’s Librarian and Literacy Lead) co-ordinated a schedule which saw Year 7 pupils reading to Year 1 and Year 8 reading to Nursery children. Belmont pupils gathered in the Library to borrow picture books to share with their little readers. An excitable babble of nostalgia ensued, while children selected much-loved books from their childhood and engaging new titles. Despite some questionable weather and a brisk walk down The Ridgeway, the Belmontians were given a hugely excited welcome by the children. We were incredibly proud of their excellent role modelling, and the patience and joy with which they read to their younger peers.

The best bit of reading to Grimsdell was reading my favourite book from the past, ‘The Gruffalo’! Also it was an interesting experience, as I got to see some teachers who I have not seen in ages. It was fun, as I got to meet some children who were really young and they were really fun to be around. It was quite funny how the younger kids thought that they could tell me what to do!

As someone who has never been to Grimsdell, it was a great experience to read to the children. It was almost as if I was Mrs Hunt when I was reading to them. Once we were done reading to the kids, they played outside which was interesting to watch. The kids really loved to run around and they even had rules. One of them told me that to walk on the planks our arm had to be shorter than a stick so we didn’t fall. They were also really friendly to us and wanted to play games. All in all, it was a really fun experience and I would love to do it again.

It was super fun to read with the Nursery students because they got into the story so much and listened avidly. We read two ‘Winnie the Witch’ books, and I let them choose from a few others in the Library. Whenever Winnie would cast a spell, I would ask them to say the magic word that Winnie always says when she casts a spell. They were very excited to shout out ABRACADABRA! It was also so fun to see the system that they have for borrowing books in the Grimsdell library, which is much like ours. The children were excited to tell us what to do!

On Wednesday, we went to Grimsdell to read to children in Nursery. Overall, I really enjoyed the experience and I hope they enjoyed it too. I especially liked how the children I read to and I were able to bond together and enjoy Reading Week. Zach, Illiana and Zara decided that they wanted me to read ‘Oi Dog’ and ‘Superdog’ to them and they really got into the stories. We also went to the little playground area afterwards and we played lots of fun games there. I really hope that we will be able to experience something like this again in the future.

Thank you to all the pupils who kindly read to Grimsdell children, and of course to Miss Bufton and Mrs Harvey for all their hard work in making this special event happen.

On Friday, many would have thought that the wonderful ability to time-travel through reading had actually become a reality, as Year 6 students transformed the Jubilee Hall into Victorian London. Students have recently been studying ‘Street Child’: a story of a poor orphan who is passed through the dirty streets of London, encountering many cruel and unpleasant characters on the way. In groups, students designed their very own Victorian Fair stall to attract passing customers, in the hope of a shilling or two. Staff were astounded by the imagination and creativity that was displayed by the students through their stalls- from games to drawings to fortune-telling to suffragette raps- and the enormous effort that was shown by all students to make their activity well-resourced and engaging. Luckily, after all their hard work selling, Dr Barnardo (aka Marlene and her catering team) provided well-earned refreshments of Victorian scones, cream and jam to feed the poor urchins. Winners

On Friday the 6th of March, Year 6 and I participated in the Victorian Fair. For the Fair, each class split into groups of around 2-4 and each of the groups created a stall that anyone from Year 6 could come to during period 2. The way it worked was that half the people from a stall went around to play with or take part in other people’s stalls and then the other half got a chance to try out their peer’s stalls. All the Year 6s have worked really hard during their English Lessons. We all had a great time!

Our Victorian Fair stall had two activities: a game of charades and also clay modelling. I worked with Olivia, Athena and Ruby. The clay modelling was where you tried to make the best model of The Lily, Snipe, Jim or Grimy Nick – who are all characters from ‘Street Child’. For the game of charades, the participants reached into the box to get a card; the cards all had something from the plot of ‘Street Child’ to act out on them. For example, ‘pretend to be Grimy Nick shovelling coal’ or ‘act out Jim escaping from the workhouse’. My role in the team was to provide the cards, Olivia got the certificates, Athena brought the clay and Ruby made the posters. This linked to our topic of ‘Street Child’ as we made all our cards scenes from the story.

The week began with Year 7’s Dystopian Workshop, which saw children working in groups to expose themselves to, and absorb, a range of famous (and in some cases infamous) Dystopian Literature: from ‘1984’ to ‘Divergent’ to ‘Brave New World’. Children worked in groups to read a variety of extracts, and discuss the themes and ideas contained within them. Once they had soaked up the writers’ words, they were then given a range of creative options for presenting their learning to the rest of the groups – from drama to dioramas to newspaper articles. Throughout the week, the groups worked on creating their masterpieces, culminating in a colourful, diverse and imaginative collection of pieces being displayed during their English lesson on Thursday. The effort and variety was eye-opening and we hope has fully enriched the children’s understanding of the genre in preparation for their creative writing assessment at the end of this term.

On Monday we were taken to the Proctor Hall during our English period and looked for inspiration among the likes of ‘The Hunger Games’ (by Suzanne Collins), ‘The Maze Runner’ (by James Dashner) and ‘Lord of the Flies’ (by William Golding). We then chose what type of project to present, from a variety of options like a role-play, a diorama and newspaper articles. On Tuesday, while the English teachers were on the Year 8 Globe trip, we worked independently to put together our pieces. This followed on into Wednesday. Finally, on Thursday we presented our finished work to our half of the year. Some of the works included Children of War  scenes, The Hunger Games newspapers and other original works.

As a group, we told a dark story set in 1996 about a young girl who was walking down a dark and wet alleyway. Not knowing what would happen next… Suddenly, a dark shadow appeared behind her, gradually getting larger. Her heart was pounding. She decided to run, but that was a mistake because she tripped up and a large hand grabbed her left shoulder. She tried to scream, but the sound was muffled. She was shoved into the back of a Toyota and, as quick as a flash, they were both gone!

Five minutes later, the car broke down in a forest and the man ran away. Unfortunately, the girl was on the edge of death…

My group wrote this story up into a newspaper article and presented it to the English teachers and our half of Year 7. Other people made a play and some of them were extremely funny! We had the choice to choose how we wanted to present our story. It was a great week and I had lots of fun!

On Tuesday, all Year 8 students embarked on a trip across London to Shakespeare’s Globe Theatre to see where his flowery language and emotive themes came to life. Students enjoyed a tour of the theatre itself, understanding the challenging environment in which actors had to perform the plays- whatever the weather!- and engaging with the history of the space. After this, they participated in a workshop with professional actors, who further developed their understanding of ‘Romeo and Juliet’ through a variety of drama activities. There was love and conflict emerging in equal measure, with children bringing much humour, effort and experimentation to some of the play’s most famous extracts.

At The Globe we learnt about the history of the three different Globe Theatres that have stood on London’s Southbank, and did some roleplay on ‘Romeo and Juliet’. In the roleplay, we learnt about body language, the meaning behind the language, and hand actions that could be used when performing. I really enjoyed this part and there were some amazing performances from my classmates. I learnt that it was based in Verona, Italy, and that there was a family war between the Montagues and Capulets. My favourite part was when we got to look around the venue, which was something we couldn’t do from the classroom. I really enjoyed the trip and would like to go now and see a play there.

On Tuesday, the Year 8s and I went to The Globe Theatre to continue our understanding of Shakespeare and his famous play, ‘Romeo and Juliet’. It was fascinating to see how the actors prepared for their specific play in the studio next to The Globe. They put in many hours to prepare and have many lines to learn, as some of Shakespeare’s amazing plays are almost three hours long, e.g. ‘Macbeth’!

We also had a chance to go to the studio across the street. We attempted to recreate a shorter version of Romeo and Juliet’s balcony scene. Before that, we were given certain acts to do for certain words, e.g. when the word ‘Juliet’ was said by the instructor, we had to put our hands on our face and yell out the phrase, “Ay me!”. This trip helped me with my acting and listening skills. I also had a great time learning about Shakespeare’s context and, if I ever had a chance to go back and watch a play, I would definitely go to watch one. Thank you to Miss Ali, Mr McBurnie and the rest of the English department for planning this amazing trip for the Year 8s.