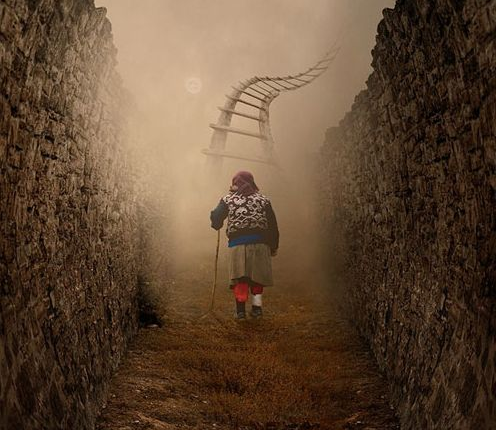 In the first week, we asked pupils to write a description in response to the image below. We had some stunning pieces submitted. We hope you enjoy the short extracts from the pupils that are shared below.

The lady has been on the long, arduous journey of life, and now she is about to embark upon the unknown…. the beginning of a new chapter, a new adventure awaits her! About to set foot upon a bridge-like structure, her frail body must be strong enough to withstand the elements of nature. A misty, mysterious atmosphere encompasses her. A powerful beam of bright light pierces through the thick, heavy fog, beckoning to her; she is compelled towards its gesture.

Walking through the narrow tunnel, the ridged, cavernous walls tower over her.

Having accomplished the quest of life, the end of its trials and tribulations are now reaching a closure. This final stage of her journey towards heaven, or god, is symbolised by the upward, meandering of the bridge. She is on the pathway towards her fate…

… The only way to succeed in this life was to get away. To get away how?

After the earthquake the city was a mess and the only life I could see within the next mile or two was the old lady swimming in her thoughts with her navy blue wellies and her floral jumper. She was walking in a straight line through the forbidden fence and then, like a lantern, drifted up into the fog.

For the first day I thought nothing of it but then she came back the next day ,and the next ,and the next. On the following day, I got curious, too curious in fact, so I decided to follow her.

Many hours later, Bea had made it to hell.

It was ghastly! Devils and demons as red as blood were everywhere. Hopeless souls thrown into burning hot fire and into mauve, bubbling, spinning witches’ pots. Screams and cries for help bounced around in her dainty ear like a booming, echoing cave. This was a horrid place; now called her home.

Twisting and turning like a snake, the path wound in front of the lady. The soft dirt crunched beneath the lady’s boots as she trudged towards her exit. She coughed on the thick smog that took up the surrounding air and was gathering in her lungs. The glimmer of the moon shone through the colourless fog, trying to escape its grasp. The lady heard the creaking of the wooden ladder that hung over her like a giant that disappeared into the smog.

Gloom. There was only gloom and dust. The cliffs towered above, leening and teetering on the edge of life. The air rumbled terror and hatred.

She has been over deadly bridges, seen erupting volcanoes and this is the final part: it is called the stairway to heaven. No one knows what is on the other side of the bridge but there are rumours that there is a whole new world with mythical creatures. The furthest people have gone is to this bridge and you can hear screams as you are walking across. The moon is glowing like a torch and the fog is like being in a great, grey pearl. The wood of the rungs are ancient and rusty.

The walls loomed over gramma’s hunched frame; their jagged edges cast strange and foreboding shadows. But they would cast their light over grandma no more as she stepped into the cloud. The bridge swayed and cackled before her, the timber rotting away, yet still as brittle as glass. But the groaning did not deter grandma, no, it seemed like the shrieks and cries that emitted from the bridge seemed to positively draw her closer. Ghostly faces rippled across that wretched cloud, distorted frames of anguish and pain that would appear and then shrink way the next second.

She already knew that her journey was dangerous. But she had faced harder. She had faced her husband dying, she was the one next to him when it happened. It was actually at the end. They spent months building ships to get out of earth. and they did. When the sun exploded, they were in the crossfire. Now, when humanity found a new home, they decided to send down a group. Martha was one of them.

As she stumbled over the uneven, potholed land, she found what she was looking for. The old lady’s cane pounded down onto the filthy ground, creating a cloud of dust which spiralled around her like a hurricane, lifting her off the floor. As she elevated, up, and up, now looking down on the stony walls which were caving in on her just a few moments ago, she felt free.

If your child would like to join the English Enrichment Google Classroom, we would be delighted to read whatever they have to offer. The class code is – tkuooir.