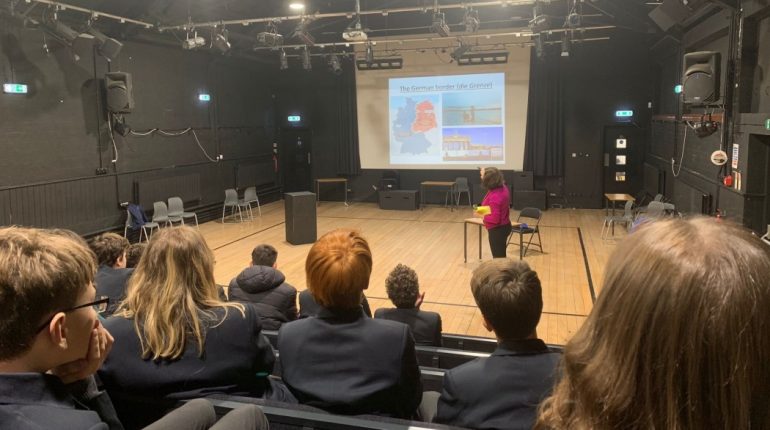 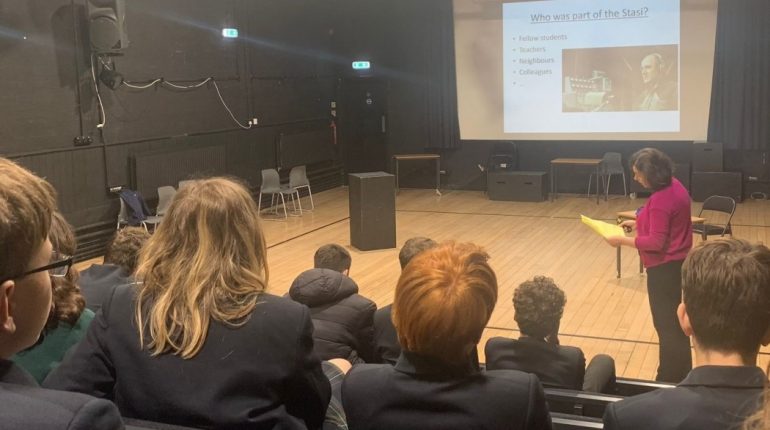 Agnes K (Fifth Form, Murray) has written the below piece about when Mrs Katya Miarka came into school to speak to pupils about her experiences living under the Communist Regime in East Germany, organised by the German Department.

On Tuesday lunchtime, an external speaker, Mrs Katya Miarka, gave a talk about her experiences of living under the Communist regime in East Germany.

Katya grew up in Potsdam, close to the border between East and West Germany. To visit people living near the border, she had to apply for a permit up to two weeks in advance. However, as she lived so close to the border, she did enjoy an (illegal) privilege – her family was able to listen to the Western radio channels and TV programmes. This was a luxury because certain towns in East Germany (Leipzig for example) were nicknamed the ‘Valley of the Clueless’ due to the lack of information from the outside world, but she and her family were able to maintain some connection.

Life wasn’t easy at that time though. There was a significant lack of luxuries in everyday life. Food was rationed and the waiting time for a car was 12 – 15 years.

The presence of the East German Secret Police, the Stasi (Staatssicherheit) was very much part of her upbringing and children were constantly surrounded by the idea of war. They never believed there would be a united Germany.

The Stasi had a huge network of about 189,000 unofficial members who acted as spies. The idea that anyone (teachers, neighbours, colleagues and students) could be a spy was instilled in children from a very early age. Relationships became fractured because you could not trust anyone. For example, just two years ago, Katya learnt that her school French teacher had been an informant. She also discovered that when she was 15, a Stasi file was opened on her! This shows the utter control of the Regime – they kept ‘tabs’ on almost everyone in East Germany.

Often people were put under pressure to pass on information. They were, for example, threatened with not being able to send their children to university. Her friend, who had spoken out against the regime, was not permitted to do his A levels (and so his only career option was to become a nurse despite his other aspirations). When one of her colleagues tried to flee the country, he was caught and imprisoned for a year! The punishments for speaking out ranged from an interrogation to travel/publication bans or banishment to remote places. The regime was also notorious for practising torture. For example, people could be left for days in dark rooms with constant unpleasant noises.

The education system was also very ideological. Everyone had to learn Russian at school and in PE lessons there was mandatory civil defence training (throwing imitation hand grenades, shooting etc.). One of the subjects studied was Marxist -Leninist Philosophy, and in History in Year 12, the only topic studied was the history of the Socialist Party. Once every fortnight, all students did a day of practical work (in a factory for example). Katya learnt to build chairs for when she would begin work. Everyone had to play a role to support the regime.

In November 1989, the Berlin Wall fell and by October 1990 Germany was unified.

This talk was absolutely fascinating and very informative on what life was like in East Germany before the Wall came down. A big thank you to our speaker for giving up her time and coming to talk to us.