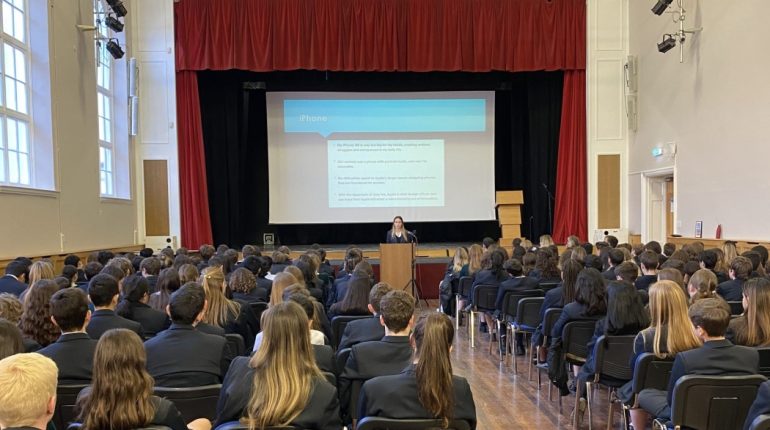 Hannah shed light on forms of gender bias that many pupils and staff were previously unaware of. Read her full speech below.

“The theme of this year’s International Women’s Day is breaking the bias. A gender bias could be using the term “he” for God when we really don’t have a clue about the gender or even nature of God! Or applying the term “man’ to all of humankind even though half of us are women!

20th Century French Philosopher and Feminist activist Simone de Beauvoir said “Representation of the world, like the world itself, is the work of men; they describe it from their own point of view, which they confuse with the absolute truth.” That perspective might, for some, appear outdated but I will explain how gender bias remains a serious issue in everyday life.

I am going to talk to you about something called gender data bias. Gender data is data that is disaggregated by sex. For example, we talk about world records in sport but always differentiate between male and female athletes. This is disaggregation of data by gender.

Gender data bias occurs when we fail to disaggregate information and make assumptions that a data set collected from a predominately male sample will hold true for the general population.

This ‘one size fits all’ approach has left gaps in our understanding of different genders experiences. It isn’t always intentional to exclude women, but by applying our understanding of user behaviours we can see that previously considered ‘objective data’ is actually male-biased.

Historically it has been assumed that there was not anything fundamentally different between male and female bodies other than size and reproductive function, and so for years medical education has been focused on a male ‘norm’. This male-default bias goes back at least to the ancient Greeks who kicked off the trend by seeing the female body as a “mutilated male body” – the male body was an ideal that women just failed to live up to.

Therefore women have been largely excluded from medical research due to this historic viewpoint and so sex-disaggregated data is severely lacking. It’s said that researchers were worried that women’s hormones would skew the results. So, they used the male body as a “default human being” in medical research.

Let me give you a shocking example of the consequences that can occur due to a lack of data disaggregated by sex.

In 1960 doctors began prescribing thalidomide to pregnant women who suffered from morning sickness. The drug, which had been available as a mild over the counter sedative in many countries since the late 1950s, was considered safe because its developers “could not find a dose large enough to kill a rat” but while it didn’t kill rats, it did affect foetal development.

Before the drug was taken off the market in 1962, over 10,000 children were born around the world with thalidomide related disabilities. In the wake of the scandal, rather than adapt research techniques to accommodate medical issues which might arise for females only, women of childbearing potential were excluded from any drug trials under FDA guidelines in the name of safety. Talk about adding insult to injury! This exclusion of women and the acceptance of the male norm went unquestioned.

The available research on whether car headrests have been designed to account for the female body is seemingly non-existent. Men are more likely than women to be involved in a car crash, which means they dominate the numbers of those seriously injured in car accidents. However when a woman is involved in a car crash, she is 47% more likely to be seriously injured than a man and 71% more likely to be moderately injured, even when researchers control for factors such as height, weight, seat belt usage and crash intensity. She is also 17% more likely to die. This is all to do with how the car is designed – and for whom.

Women tend to sit further forward than men when driving because on average we are shorter. This is not however the ‘standard seating position’. Women are ‘out of position’ drivers and our willful deviation from the norm means we are at greater risk of injury on frontal collisions. Essentially car design and safety is biased towards the male body.

The reason this has been allowed to happen is very simple: cars have been designed using car-crash test dummies based on the ‘average’ male.

Another example is the iPhone. Today it is obvious that the bigger the phone screen, the better. The average smartphone is now 5.5 inches and while we are admittedly all impressed by the size of your screen, it’s a slightly different matter when it comes to fitting into half the populations hands, not to mention minuscule or non-existent pockets. The average man can fairly comfortably use his device one-handed but the average woman’s hand is not much bigger than the handset itself. Is it unfair for women to pay the same price as men for a product that delivers an inferior service to them?

However, on the bright side, screens probably won’t be getting any bigger because they’ve hit the limit of men’s hand size. Good news for men!

Gaps in gender data and the lack of trend data make it difficult to monitor progress for women and girls. This lack of data makes it harder to accurately identify, analyse and monitor the separate needs and vulnerabilities of women and girls and therefore develop effective evidence-based policies and solutions.

Only 13% of countries dedicate a budget to gender statistics, only 15% of countries have legislation that mandates specialised gender-based surveys and only 41% of countries regularly produce violence against women data according to a study released by the UN in the context of the sustainable development goals of 2020.”