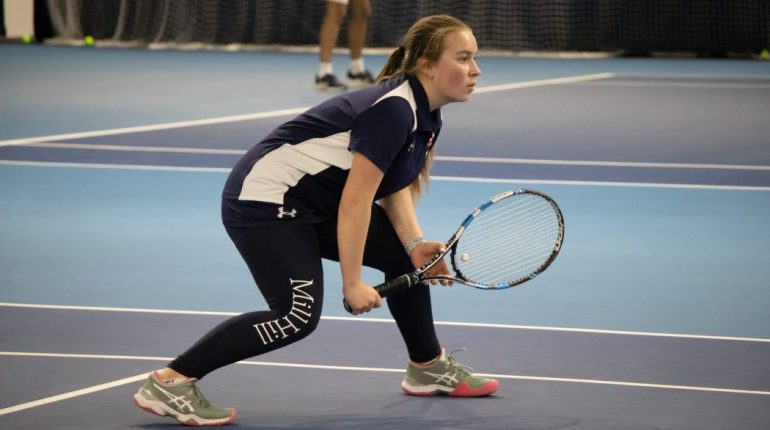 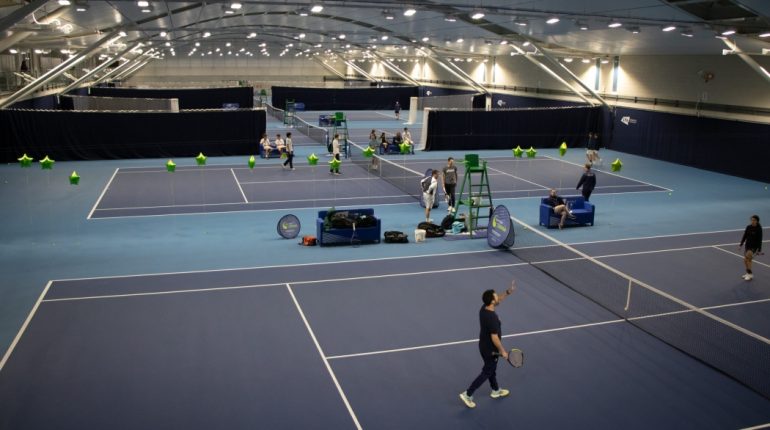 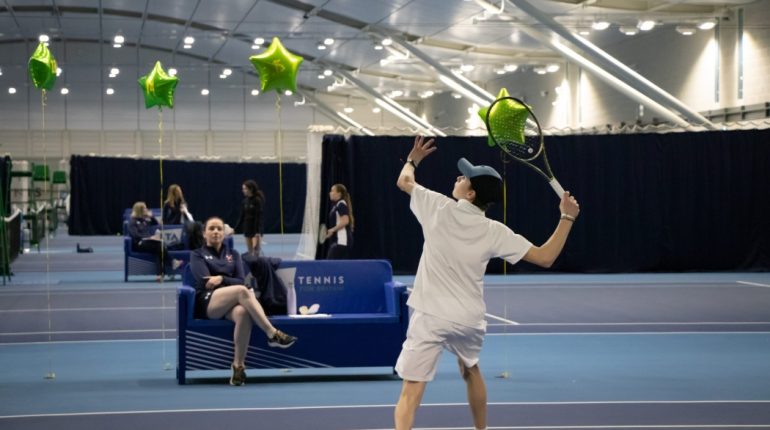 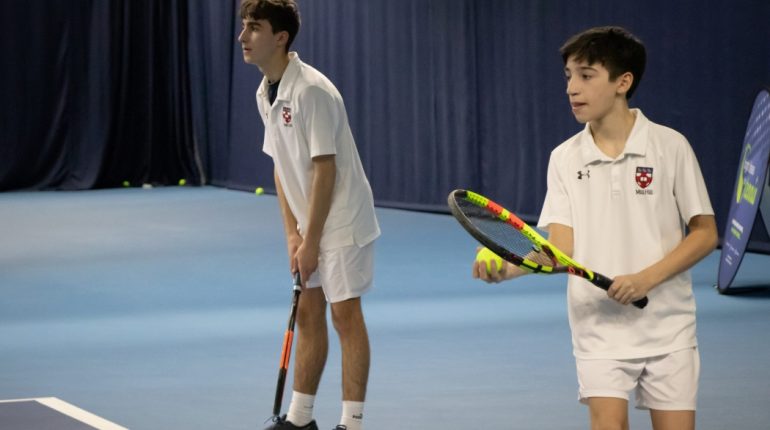 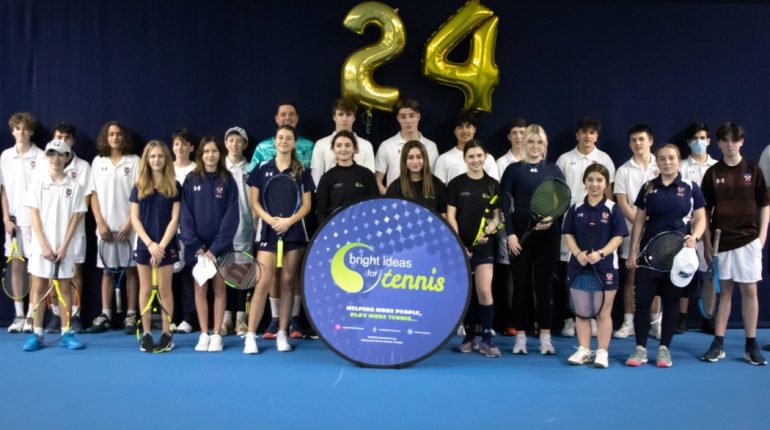 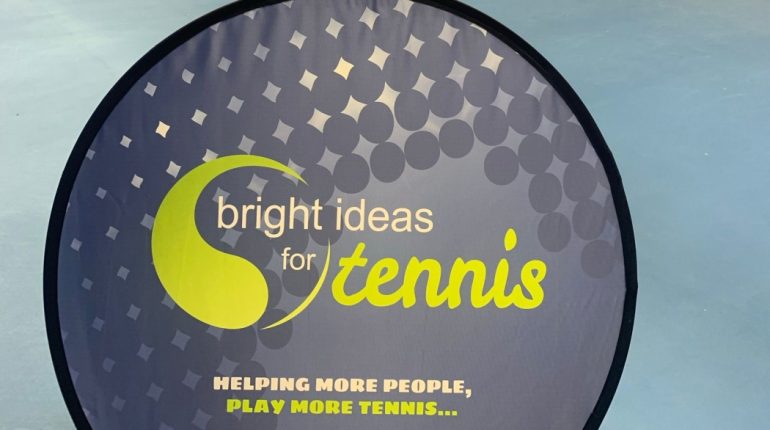 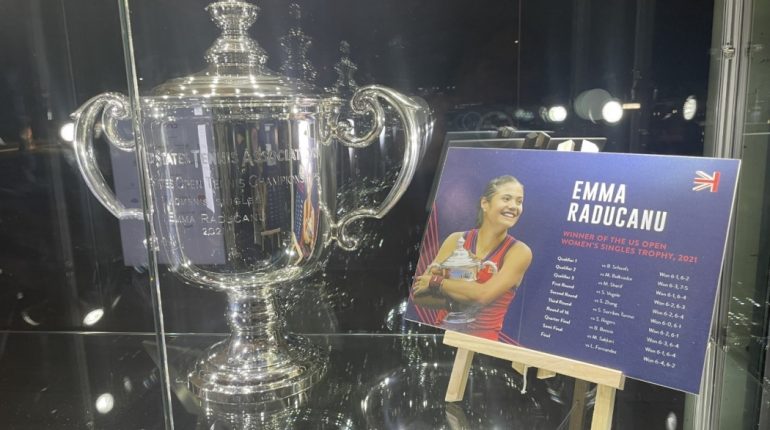 This weekend a group of Mill Hill School pupils played in a 24-Hour tennis marathon to raise money for the Bright Ideas for Tennis Charity.

Miss Ward, Head of Tennis has written the below about this fantastic event:

“Excitement continued to build for 27 Millhillians as we departed Mill Hill School at 6.00 pm on Saturday to travel to the National Tennis Centre for the 24-hour Tennis Marathon event in aid of the charity, Bright Ideas for Tennis.

Pupils were bowled over with the centre’s modern state of the art facilities; 20 Tennis courts, a high-performance gym, and ice baths for the elite players.  They were particularly excited to see Emma Raducanu’s US Open 2021 Singles trophy prominently displayed in a cabinet in reception on arrival.

Our 8.00 pm to midnight playing slot with the professional tennis players meant that pupils had full access and usage of the NTC’s 6 indoor acrylic US specification hard courts, replicating grand slam surface conditions.

The Great Britain Davis Cup and Fed Cup players did not disappoint! Straight away our pupils engaged in 10 minute doubles rotations competing against some of the best former professionals in the country. As one Millhillian pair finished another pair took to the court, having warmed themselves up on the beautiful blue surfaced courts, ready to take on the challenge.

Professional Marcus Willis was particularly popular with the pupils. In 2016 he won 6 rounds of pre-qualifying to Wimbledon and then reached the 2nd round of the main draw before finally succumbing to Roger Federer on centre court in 3 tight sets.

James Auckland, was also popular; as a doubles specialist, he was an occasional partner to Andy Murray, and has had previous victories over Nadal and the Bryan Brothers.

Other professionals included Colin Beecher, Lee Childs, Danny Sapsford and Josh Goodall. The professionals made our pupils work hard, whilst also having lots of fun. They also provided first-hand feedback and useful coaching tips to pupils.

During the evening, our pupils also had the opportunity to have their speed of serve tested with a speed gun. There were some incredible results with several recordings ranging between 80 – 90 mph.

Our pupils had to dig deep to get through the final hour. The staff and parents in the overlooking gallery continued to offer support and encouragement. The professionals set up a doubles drill over two courts for the final 40 minutes which was fun, competitive and engaging and brought out some of the best tennis to complete the evening.

Danny Sapsford, Manager for Bright Ideas for Tennis and all the professionals were really impressed with the levels of ability and the way our pupils conducted themselves throughout the evening.

Danny was also delighted to announce that Mill Hill School is the highest school fundraiser for Bright Ideas for Tennis. Our school has been awarded a Tennis coaching master class, which the professionals will deliver to pupils in the Summer Term here at the School. This will be another amazing opportunity for our pupils – I will be able to confirm the date very soon.

As you can imagine the return bus journey to Mill Hill in the early hours was somewhat quiet due to an exhausted, but extremely satisfied bunch of pupils and staff!

I would like to particularly thank the staff team who supported this event and gave up their Saturday evening to be with the pupils and to help make this a wonderful experience; Miss Kleimberg, Miss Lilley, Mr Godwin and Mr Jochim. Huge thanks also to Miss Coleman for her live Instagram updates.

I am delighted with the overall outcome of the event, and all the previous fundraising achievements towards this wonderful charity.

I would like to thank all the parents and staff who have supported in their varying ways, but above all to the pupils who have really risen to the challenge and helped to make Tennis more inclusive for those with physical, and sensory disabilities and those with mental health issues.

All that remains now is the final fund raiser, when Mr Barron and myself will throw ourselves out of a plane on Saturday to complete our sky dive. We are both sharing mixed feelings about this! But we know it is all for a good cause. We will then be able to announce the overall amount of fundraising which currently stands at £10,500!

Well done and thank you all!”