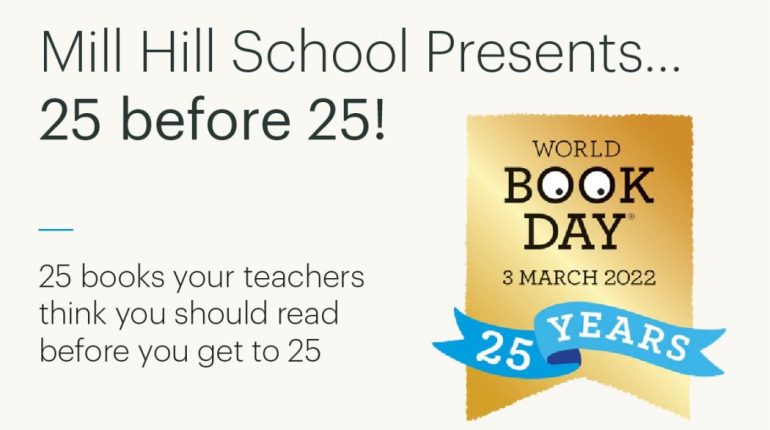 Below is a list of all the books selected by our pupils and staff for 25 Before 25, our World Book Day project to share many amazing books that we want our pupils to read by age 25.

Sally Mann is an American photographer. Her work is mostly analogue, has human connection at its roots and has often been the source of controversy. This memoir links the idea of being an artist professionally to life as a ‘normal’ person with everyday responsibility, vulnerability and feeling. Mann explores the homes of both her parents and tells us her life story without it seeming like information, rather a connection directly to her as both an artist and woman.

Biology – The Body by Bill Bryson

The cover states this book is ‘a guide for occupants’ and indeed it is. Giving a broad overview of how the body works, heals itself and our physical make up. This book is full of interesting facts and, in places, very funny.

A wonderful (short) read, that uses classic stories and historical insights in an attempt to explain complex economic concepts. It is a book that helps to make sense of a troubling world while inspiring us to make it a better one.

Head of English – Girl, Woman, Other by Bernadine Evaristo

Joint winner of the 2019 Booker Prize, Bernardine Evaristo’s novel is a story for our times. Twelve characters, little punctuationo and a web-like structure that grows in complexity and beauty, this is the book to read about identity, relationships and the world – past, present and future. Part prose, part poetry, to read this work is to be enthralled and
educated.

Noah was born a crime, son of a white Swiss father and a black Xhosa mother, at a time when such a union was punishable by five years in prison. An inspiring, often comic, and unforgettable true story!

This thought-provoking book addresses the question of what happens when humans are no longer the smartest species on the planet.

One of the most significant plays of the 21st century, Top Girls incorporates Churchill’s trademark love of the fantastical and features a dreamlike prologue in which Marlene meets a number of women from literature and history down the ages. The story examines the roles available to women in modern society, and what it means or takes for a woman to succeed. It also dwells heavily on the cost of ambition and the influence of Thatcherite politics on feminism.

English – To Kill a Mockingbird by Harper Lee

What a novel: every child, every adult, every parent should read this book. It captures sensitively the emotional, physical and psychological changes children undergo as childhood moves into adolescence. It is a good book that should inspire good in people: that may make it sound rather saccharine, but it is the sincere and heartfelt message of this fun, profound and thought-provoking novel; it is open-minded and rational, qualities certainly needed in these times; it deals with racism, cruelty, prejudice and discrimination, right and wrong, but with compassion and grace.

At its heart are children confronted with the realities of the world, and adults challenging them to make sense of it. And, at its core, is a simply-stated yet profound piece of advice that Atticus, the wise, unflappable parent, gives his child

Scout that we would all do well to heed:

“‘First of all,’ he said, ‘If you can learn a simple trick, Scout, you’ll get along a lot better with all kinds of folks. You
never really understand a person until you consider things from his point of view-‘

‘-until you climb into his skin and walk around in it.’”

The Stranger is the first novel by Albert Camus, published in French as L’Étranger in 1942. The novel, an exploration of the philosophy of the Absurd, follows the life of Meursault, a Frenchman who lives in Algiers (a pied-noir). The novel is famous for its first lines: “Mother died today. Or maybe it was yesterday, I don’t know.”

A Thousand Splendid Suns is a gripping tale of two young women, Mariam, an illegitimate child, and Laila, an orphan, and the difficult lives they lead after marrying the same man, Rasheed. Set against the volatile events of Afghanistan’s last thirty years – from the Soviet invasion to the reign of the Taliban to post-Taliban rebuilding.

Narrated by Death, the plot follows a young girl, Liesel Meminger, the thief of books, as she deals with hunger and bombs in Nazi Germany. This book is gripping and an absolute must-read!

History and Politics – The Five by Hallie Rubenhold

It’s about the victims of Jack the Ripper – it gives them a name and a life and hardly mentions Jack at all!

Written by a survivor of the holocaust, this book is a very short account of how to overcome and endure harrowing experiences. It is a real bucket list book.

Lewis Carroll aka Charles Dodgson, professor of Maths at Oxford. Lots of equations and mathematical themes.

It is beautifully written and allows the reader to feel as though they have developed a close relationship with Bernstein
himself.

Following the highly successful All Blacks team James Kerr goes deep into the ethos and aspects of the world’s most successful sporting team to reveal 15 powerful and practical lessons which can be used for leadership and business.

In the beginning there was… a turtle.

Somewhere on the frontier between thought and reality exists the Discworld, a parallel time and place which might sound and smell very much like our own, but which looks completely different.

Particularly as it’s carried through space on the back of a giant turtle.

An enlightening and inspiring read which advocates for the decency of most people and proposes a new outlook on life in spite of prominent ideas that humans are egotistical and malevolent.

A work of irreverent comedy genius that will not only make you laugh but could also make you look at the world very
differently afterwards!

This is a short but thought-provoking read perfect for intermediate learners. Crónica de una muerte anunciada is
written backwards. The book starts at the end and then progresses forward back towards the beginning. Its opening line is: “El día que lo mataron, Santiago Nasar se levantó a las cinco de la mañana“. (“The day they killed him, Santiago Nasar got up at 5am”). You know he has been killed, but over the course of the book you will find out who has done it and, most importantly, why.

Outliers gives the story of success for people from many different walks of life from Bill Gates to the Beatles.

Fourth Form Scholars – We Were Liars by E. Lockhart

A timeless book with universal themes of family and grief with an unusual writing style – it will have a lasting emotional effect on you!

Sixth Form Scholars – The Hate U Give by Angie Thomas

‘The Hate U Give’ by Angie Thomas is a powerful and compelling story that addresses pervasive battles around systemic racism and feeling othered, showing different perspectives on extremely relevant topics to our world. This book is vital as it explores the struggles of people of our generation and provides a deeper understanding of how to support those facing this discrimination.

Please come to the English corridor to see the display of all of these books or the library to pick one out!