Who is Peter Collinson?

Peter Collinson was a successful Quaker merchant who combined his international textile business with a passion for plant introduction and scientific study. He became one of the major botanists in the world of his time, conversing with Carl Linnaeus in Sweden, John Bartram and Benjamin Franklin in the USA and with Lancelot Brown, Lord Petre and Sir Hans Sloane in England. It was largely due to the patronage of Sloane that Peter Collinson was elected a Fellow of the Royal Society.

At the tender age of two Collinson was sent by his father to live with his grandmother in Peckham where the young boy developed his gardening skills and the plant collecting “bug” which was to be a life-long obsession. Collinson’s interest in plant introductions became an expensive pastime; for example, he financed the production of Mark Catesby’s Natural History of Carolina, Florida and The Bahama Islands, a seminal work consisting of etchings and notes from Catesby’s collection of plants gathered on his trip to the Americas, a trip made possible by sponsors found by Collinson. He developed a lasting friendship with Philip Miller who took charge of the Chelsea Physic Garden in 1722 with the specific brief to develop rare exotic introductions. Miller’s botanical dictionary became the bible for gardeners on both sides of the Atlantic. It was published and financed through the good off ices of Peter Collinson and his influential lifelong friend, Benjamin Franklin. In July 1736 Linnaeus visited Collinson in his Peckham garden where he was said to be have been very impressed with Collinson’s collection, not least by the Magnolia virginiana which had been painted by Catesby.

A very important North American contact emerged in Pennsylvania through the intermediary off ices of Benjamin Franklin who knew how anxious Collinson was to establish a plant exchange mechanism on a more botanically sound basis. He was put in touch with John Bartram, a farmer from Philadelphia, who was willing to send to Collinson boxes of materials, comprising roots, seeds, dried insects and stuff ed birds for which Collinson agreed to pay five guineas a box. In return Collinson sent books, plant material and even clothes to Bartram. Though they never met, their friendship was lifelong and profound. The Bartram Botanical Garden in South Philadelphia celebrates Bartram’s contribution and importance. In 1749, on the death of his wife’s father, the Collinsons inherited Ridge Way House in Mill Hill together with eight acres, a perfect site for his garden. He spent the next two years transplanting the entire collection from his Peckham garden to his new home, the garden of which lay to the south of the house on ground which sloped down towards the west and from which could be seen on a clear day, just visible in the distance, the palace of Windsor Castle.

He took great care with the transplanting from Peckham garden. Most of trees, shrubs and flowers were so precious, he planted them himself. The Mill Hill garden comprised the “Best Garden” and the “Field”, by which he meant trees. The importance of Collinson’s garden at Mill Hill lay in its remarkable collection of rare species, many of which he had introduced and raised himself. Growing conditions varied in diff erent parts of the garden with areas that were both shaded and boggy while others were sunny and dry. Many of John Bartram’s American species were represented along with many curiosities from elsewhere, such as China and Russia. John Bartram’s specialities included magnolias, kalmias, rhododendrons, azaleas and a vast array of colourful annuals. It is said that his favourite shrub at that time was Rhododendron maximum which came from the Appalachian and Allegheny mountains in the United States. Many of the plants were listed by Daniel Solander, a favourite student of Linnaeus. Introduced by Collinson to members of the Royal Society, Solander joined Joseph Banks on Cook’s expedition to the Southern Ocean on HMS Endeavour and became the first curator of the British Museum. Linnaeus named a genus of plants Collinsonia, thus ensuring that Collinson’s name would be remembered for “as long as men and books endure”.

In September 1761 Peter Collinson asked Bartram to send no more seeds or plants, unless anything new or rare turned up and in August 1768 Peter Collinson died. In 1807 Mill Hill School was founded for the sons of nonconformist dissenters and initially occupied Ridge Way House later to be replaced by the present building designed by Sir William Tite, architect of the Royal Exchange. 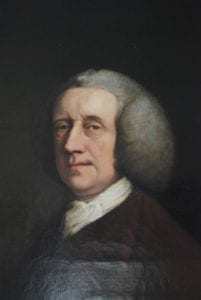