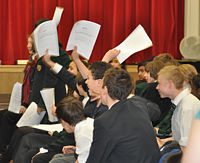 Millhillians in the Remove and 4th Forms were joined on Monday 28th March by students from Mill Hill County High School for a Mock Parliament day, run by a specialist tutor team from ‘The Debate Chamber’.

After the formation of four new political parties during the morning sessions, students eagerly developed manifestos and campaign strategies in the hope of being voted into government. After these exciting electoral campaigns, in the spirit of the age a coalition government was elected with Prime Minister Finn Keenan (Authority Party) leading the afternoon’s parliamentary session alongside Deputy Prime Minister Lindsey Fransman (Democracy Party). Three bills were voted into legislation and an energetic Prime Minister’s questions ended the session with congratulations from the Right Honourable Toby Davies to the Prime Minister and his party.

The day not only provided a thrilling insight into the workings of Britain’s political system, but also allowed students to develop their critical thinking, public speaking and team work skills. An excellent opportunity for all.