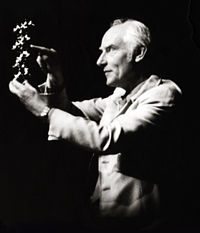 Old Millhillian Francis Crick (Ridgeway, 1930-34) was a British molecular biologist, physicist, and neuroscientist. He was one of the co-discoverers of the structure of the DNA molecule in 1953, following which he, James D. Watson and Maurice Wilkins were jointly awarded the 1962 Nobel Prize for Physiology or Medicine. To celebrate the 50th anniversary of the award of Crick’s Nobel Prize, we will be holding a series of events to celebrate the School’s greatest scientist.

“My whole scientific career was grounded in the excellent science teaching I had while at Mill Hill.”Francis Crick, taken from the biography,
Francis Crick: Hunter of Life’s Secrets by Robert Olby

Coming up in the Spring Term are the two remaining Francis Crick Lectures, which will be delivered by Lord Kakkar, Professor of Surgical Sciences at University College, London (Thursday 26th January, 6:30pm, Patrick Troughton Theatre) and Professor John Deanfield, Professor of Cardiology and Head of Cardiovascular Prevention, University College, London (Wednesday 8th February, 6:30pm, Patrick Troughton Theatre). Later in the year we will be presenting a series of lectures under the banner ‘Breakthroughs’ which will not only include medical and scientific advances, but revolutionary landmarks in sport, engineering and design.

The lectures are not the only science-related events taking place this year:

“Francis Crick was a superb British scientist. He embodied the qualities of collaboration, creativity and tenacity we would like to instil within the culture of the institute to be named for him. Francis Crick led a revolution in biology and medicine, was noted for his intelligence, openness to new ideas, for switching disciplines from physics to biology.”Paul Nurse, Director and Chief Executive of The Crick Institute
(formerly UK Centre for Medical Research and Innovation)

Mindful of the School’s great scientific heritage and of the importance of science education today, in 2009 the Headmaster defined as a priority the refurbishment and upgrading of our science facilities. As a result, plans were created for the complete refurbishment of the interior on a laboratory by laboratory basis. Work started in summer 2010 and continued in summer 2011 thanks, in large part, to generous gifts to the Foundation Appeal. The refurbishment of the Physics Department is now complete, and this work has made a real difference to those who teach and learn there. In Summer 2011 the exterior of the science building was redecorated and this year we will be pressing ahead with the first phase of the Biology Department refurbishment. Once this is complete, the Chemistry Department will be upgraded to the same high standard. The Foundation Appeal has supported the Foundation’s commitment to science teaching, not only raising the money to pay for the extensive works at the Senior School, but also with projects such as the Poon Nature Reserve at Belmont and the Science Garden at Grimsdell. To see the impact of the Foundation Appeal in these areas and to learn more about the Appeal and its strategy to help Mill Hill, Belmont and Grimsdell, please watch our new video.