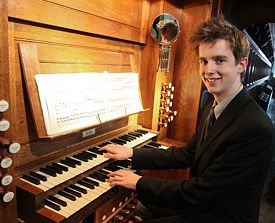 Benedict Kearns (Weymouth House) has recently gained his LRSM in piano. Performing music by Bach, Haydn and Messiaen, he was delighted to learn that he passed his diploma with distinction. Benedict also won the Farrow cup at the Farrow Singing Competition performing music by Mozart and Herbert Howells. Benedict is planning on reading music at Kings College Cambridge where he will also audition to become a choral scholar. We are delighted to see Benedict following in the footsteps of Ben Glassberg (McClure House 2008-2012) who is likewise reading music at Cambridge University.

Recently heard on BBC 3 singing the solo in the Choral Evensong broadcast for Ash Wednesday performed by the choir of St John’s College Cambridge was Michael Tuft. Michael is an accomplished singer, pianist and trombonist and has been awarded the Helmore Music Scholarship.

The Helmore Music Scholarships are named in honour of the Helmore Brothers who were pupils at Mill Hill in the Victorian Era. The brothers were gifted musicians. The eldest brother, Thomas, was the Master of the Children of the Chapel Royal and Frederick was Choirmaster to the Prince Consort.