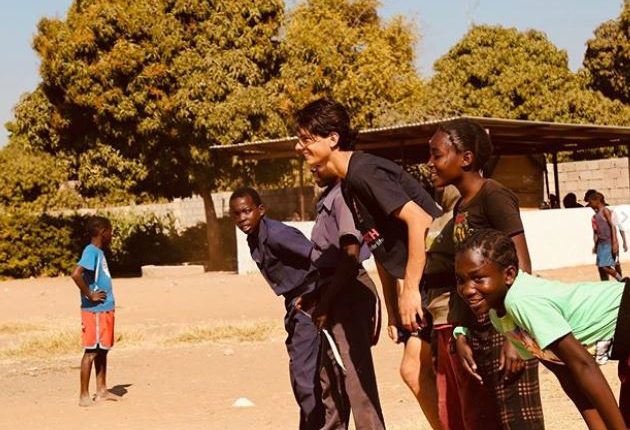 Another 7am departure saw an early wake up. Following some frantic packing and room checks we said goodbye to Eureka Rest Camp for the last time, Livingstone-bound. The thought of a seven hour journey ahead was no where near as appetising as the bacon and egg roll we were greeted with having sat down on the coach, a true luxury considering peanut butter sandwiches had been my usual breakfast for the previous week.

With raised spirits we set off for our first destination; the beloved petrol station. Three hours down the line having filled up on snacks and dodgy chips for some, we got back on the road. Pastor Albert and the lovely Pastor Jean, who had welcomed us with such kindness and had accommodated us with such generosity back at Joseph Linda School (where we had felt at home for the last six days) asked us to visit a new school they had opened.

Slightly dazed, we got off the bus in a very rural and barren area. It was immediately apparent that the locals of this small settlement were incredibly isolated from any form of interaction with anything further than around 5km away. This seclusion struck me instantly and our collective tiredness wore off rapidly as we walked from the bus to the two newly built classrooms. The work of Pastor Albert and Pastor Jean concerning the Linda compound never failed to inspire us however their ambitions of helping Zambian children on a larger scale displayed a level of dedication and selflessness I’ve never witnessed first hand.

A touching singing performance by the young pupils of this new school helped to put the four hours of driving ahead into perspective and as we arrived at Fawlty Towers I was further thankful for such comfortable accommodation. For the first time in a week Group B were reunited with WiFi, which meant catching up before dinner and meeting some pupils from another English school staying in Fawlty Towers. We had an evening trip to the supermarket to prepare for our safari and a relatively early night before two exciting days ahead.