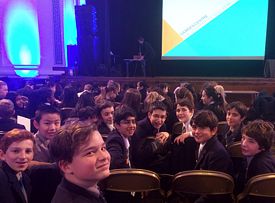 On Friday we travelled to the Camden Centre for a day of talks with Mrs Pugh and Mr Spink. The first talk was by James Grime who talked to us about Code Breaking and the Enigma Machine. We were taught about the Caesar Shift (not a dance move), how the Spartans sent messages and how Mary Queen of Scots plotted to kill Elizabeth I while in a prison cell. The talk finished with a demonstration and explanation of how the enigma machine worked. The second talk was by Matt Parker and was about shapes. After having to guess the amount of corners and edges on a dodecahedron, we were amazed by the mobius strips and smoke rings created by an improvised bin. After a quick lunch break, the final lecture was called ‘Maths vs Zombies’ by Dr Thomas Woolley. After learning that the best possible thing to do in a zombie invasion was to run, we began the coach ride home. After a great day, everyone went home with Code, Shapes and Zombies on the brain. An inspiring day out was had by all.